“Then he lay down and slept under the broom tree. But as he was sleeping, an angel touched him and told him, “Get up and eat!” ~1 Kings 19:5 NLT

This passage was used in a sermon I heard this week (kudos to brother Larry Paige). The purpose of the message was to raise awareness of the physical and mental influences of anxiety and depression.

I believe that God did not intend for us to be in depression, anxiety and self-doubt. Yet there are times in our life when these feelings and circumstances surround our entire being. In these moments our perspective is skewed. Everything we see and hear converts into a message lack. “I don’t have enough.”

“I just want to feel this way.”

When I read the passage in 1 Kings, it brings some insight into how we can begin to deal with these negative feelings.

Before we get into what the angel told Elijiah, it’s important to note that an angel came down and touched him. Our angels might not come in the form of white-robed creatures with wings. Perhaps this is a friend, a neighbor or even someone else in need. Someone or something is going to trigger and call you to make a move.

The difference between moving and not moving will be in having our eyes and ears ready to receive.

This part reminds me of when Tony Robbins talks about his morning routine. He begins with a radical change in his physiology. I’m not saying everyone should go jump in a cold shower or an ice bath. However, I something radically different than the position you were in before is required. If you are lying down, jump up. If you are walking, sprint! Movement is one way to reduce cortisol  and increase dopamine (the pleasure hormone) in your system.

If we can get ourselves moving, this is already a huge step.

Get the right food

There have been numerous times where I get so absorbed in a project and forget to eat. The lack of food quickly turns into a energy drop and in an increase in hangriness. My mood shifts and creativity wanes down. The default feeling I have is to take a nap. This might help a little, but I probably really needed to eat something.

Eating something doesn’t mean to eat anything. A fried chicken wing is going to have a different effect on your body than a piece of grilled salmon.

After you start to change your physical state and get some fuel in your body, it’s time to move. You can reduce those cortisol levels by increasing the amount of good stress and action. This is one reason why I like weight training and cardio. It helps set my body in a positive vibration.

The key word for moving is momentum. When you are in motion, make sure you keep fueling and driving forward to stay in motion.

In this particular passage of 1 Kings we can see that Elijiah made some moves. He got up. He ate some bread. Then he had enough energy to hike a mountain and share his message. 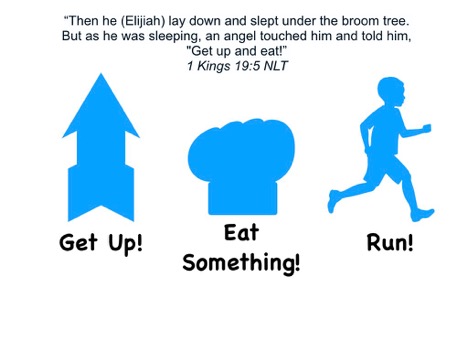